Surgeons Separate Conjoined Twins with the Help of 3D Models

UM Radiologists provided preoperative imaging and worked with UM bioengineers to design lifelike, 3D printed models that helped plan the necessary steps in this difficult surgery. The models were printed using the Stratasys J750™ 3D printer in the Fabrication Studio, in the Duderstadt Center on University of Michigan’s North Campus.

The full story is posted below: From a Press Release by Michigan Health 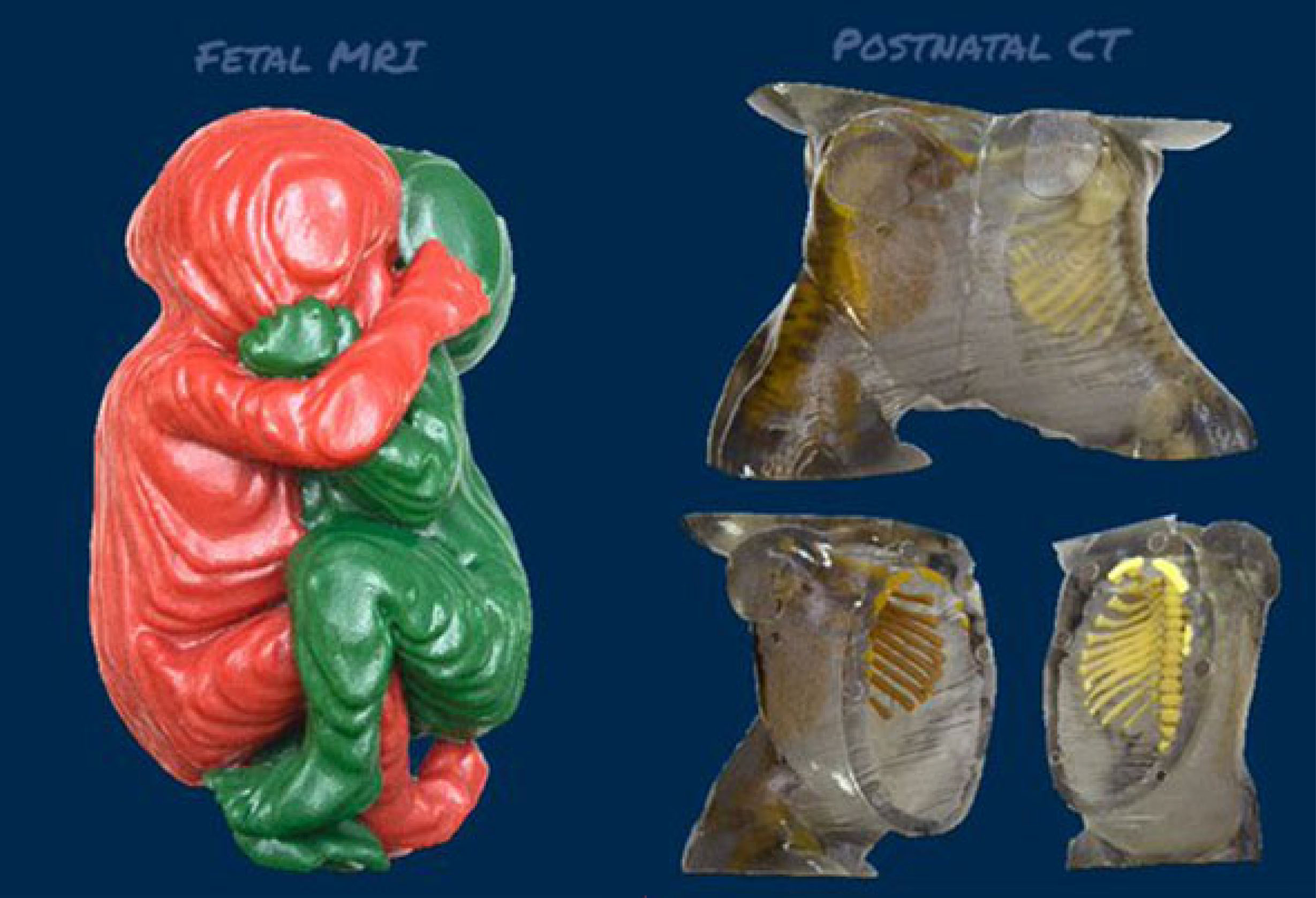 Radiologists worked with UM bioengineers to design lifelike, 3D printed models of the girls’ livers and body structures to plan for surgery.

Sarabeth and Amelia Irwin spent the first 13 months of their lives inseparable: they’d never slept in their own beds, played in different rooms or ever been held alone.

But that world dramatically changed after doctors at Michigan Medicine C.S. Mott Children’s Hospital successfully separated the one-year-old conjoined twins who were connected from their chests to belly buttons.

The nearly 11-hour surgery, which is the first of its kind at Mott and believed to be the first in the state of Michigan, involved a team of more than two dozen doctors, nurses and other specialists who spent months preparing for the complex procedure.

Each girl was born with two arms and two legs, individual hearts and digestive tracts, but their livers were connected.

“For everyone in the room, it was a very emotional and extraordinary moment when the last incision was made to separate these girls from one to two,” says George Mychaliska, M.D., pediatric and fetal surgeon at Mott.

“This was a monumental team effort that involved virtually every clinical department here and a group that was incredibly committed to collaborating in the most innovative way.”

Parents Alyson and Phil Irwin, of Petersburg, are already enjoying new firsts with their twin girls who came home about a month after the surgery.

“We just keep saying, ‘they’re in separate beds.’ It seems like such a normal thing. But for us, it’s pretty incredible,” Phil says.

“Sarabeth and Amelia are different people with their own attitudes and personalities,” he adds. “They deserve to live their own lives. They will always have a strong bond, but we knew we had to give them a chance to be separate because they are separate people. We are thankful to the doctors at U-M who gave them that chance.”

“It will be the best feeling to hold, cuddle and snuggle them,” Alyson says.

Multiple teams across many specialties were involved with coordinating the separation surgery, each playing a unique role from pre-operative to post-operative care. Mychaliska led the surgical team, along with pediatric plastic surgeon Steven Kasten, M.D. and pediatric heart surgeon Richard Ohye, M.D.

"For everyone in the room, it was a very emotional and extraordinary moment when the last incision was made to separate these girls from one to two." George Mychaliska, M.D.

The radiology team, led by Maria Ladino-Torres, M.D. and William Weadock, M.D., provided preoperative imaging and worked with bioengineers from University of Michigan to design lifelike, 3D printed models of the girls’ livers and body structures. The models showed what structures the girls shared, helping doctors plan for every meticulous step of the surgery.

The pediatric anesthesia team, led by Paul Reynolds, M.D., Bridget Pearce, M.D. and Michael Puglia, M.D., helped choreograph the complex operative monitoring and care while the girls were still conjoined and after separation.

Plastic surgeons, who had placed tissue expanders in the twins to provide them with extra skin, made the initial incision while cardiac surgeons separated the chest structures and pediatric surgeons divided the merged liver. The team used an innovative intravenous fluorescent dye which outlined where one liver started and the other ended, helping surgeons precisely and safely separate them.

After separation, the girls were repositioned at opposite ends of the same operating room table while the surgeons divided into two groups working in concert to reconstruct the chest and abdomen and make separate belly buttons.

The girls’ journey also involved maternal-fetal medicine specialists, neonatal and intensive care nurses and providers and technicians who set up the OR with monitors and electrical support for two patients.

Every detail was carefully planned – down to color-coding in the OR to identify which team was in charge of which patient after separation. Amelia’s pink painted fingernails matched the surgical hats for her team while Sarabeth’s were yellow.

The girls had weeks in the pediatric intensive care unit, sharing the same room, which is not typical.  Their postoperative care was managed minute by minute by the Pediatric Surgical Critical Care team led by Samir Gadepalli, M.D., Meghan Arnold, M.D., Arul Thirumoorthi, M.D. and Anila Elliot, M.D.

“We all recognized that in some way, psychologically, this might be traumatic for these little patients because their lived experience had been with their twin right next to them. Our pediatric intensive care unit configured a room that could support both of them so they would see each other when they woke up,” Mychaliska says.

“I’m a father of twins and know twins are very close,” Mychaliska adds. “Sarabeth and Amelia will always share a really unique bond and I think the future is bright for both of them. We wish this family all the best.”

THE DIAGNOSIS FOR CONJOINED TWINS SARABETH AND AMELIA

In February 2019, Phil and Alyson excitedly drove to their 20-week ultrasound, anxious to learn whether their now 3-year-old daughter Kennedy would be having a younger brother or sister.

The technician pulled up the screen but then almost immediately shut it down, asking who their doctor was. That was the first sign something was wrong.

Minutes later, the couple listened to their doctor explain they were having twins – but they were attached to each other.

“She told us she was sorry they couldn’t help us and that we had an unfortunate decision to make,” Phil says. “We were stunned.”

Conjoined twins develop when an early embryo partially separates to form two individuals, but many are stillborn or die shortly after birth.

The couple was referred to Michigan Medicine’s Fetal Diagnosis and Treatment Center. Before they got home from the appointment, U-M had already called.

“We were grateful that they responded so fast,” Alyson says. “It was nice not to have to sit with that feeling of hopelessness and uncertainty for so long.”

LABOR AND DELIVERY FOR CONJOINED TWINS

The day after that ultrasound, they had a repeat ultrasound at Michigan Medicine’s Fetal Diagnostic Center and met with the director, Marjorie Treadwell, M.D.

“We were struck by the support they had for each other and their vested interest in what would be the best thing for their daughters,” Treadwell recalls. “When you’re having a baby you have a vision for your family and news like this turns everything upside down. You have to readjust your expectations completely. We had a really challenging, honest and heartfelt conversation.”

From the scans, it appeared the girls had their own vital organs and limbs and the Fetal Diagnosis and Treatment Center team believed they could offer the family a separation surgery.

“We had some good appointments and some where we left crying. We were preparing for the worst possibility,” Alyson says, adding she was grateful for the Mott music therapy team who recorded the babies’ heartbeats and put them inside teddy bears.

Then, at her 34 week check in, Treadwell told them it was time. Blood flow had started to slow from the umbilical cord to the girls.

A few days later, they packed up for the hospital. During the nerve-wracking car ride, the country song “Stuck like Glue” by Sugarland came on the radio.

“We both laughed,” Alyson says. “That helped break the tension.”

On the day of the caesarean, nearly double the usual number of providers were in the room at Michigan Medicine Von Voigtlander Women’s Hospital, including OB anesthesiologists, nurses and neonatologists. A separate team was assigned to each baby plus Alyson.

There were extra logistical challenges in delivering two babies simultaneously, with 3D-printed models helping the team plan for the size of the incision and location of the placenta.

Several people worked together to coordinate lifting the babies out of the abdomen in concert without straining the organs where they were attached.

“We were prepared for everything and that is what it made it go so smoothly,” Treadwell says. “We are all honored to have been part of Amelia and Sarabeth’s journey.”

And after a flurry of activity, the Irwins finally met their new daughters.

“I remember them briefly putting the girls on my chest. It was very sweet and special being able to hold them and see them for the first time,” Alyson says. “It was just very surreal. There was so much adrenaline from everything that led up to that point.”

But then the girls were quickly whisked away for care in the Mott Newborn Intensive Care Unit where they stayed for 85 days.

CONJOINED TWIN SISTERS LIVING AS ONE

The blue-eyed twin sisters may be identical, but they have quickly shown their differences. Amelia is the vocal “little diva who both whines and smiles at the drop of a hat,” her parents say, while Sarabeth is the “quiet and calm instigator.”

And they had gotten used to sharing everything – from sideways diaper changes and feedings to learning to pull themselves up.

Since birth, they’ve travelled together in a customized car bed. They like to steal each other’s pacifiers in what their parents call “binky wars.” Sometimes, the girls would wrap their arms around each other in a warm hug when they fell asleep at bedtime.

Other times, Sarabeth, the “night owl,” would wake Amelia up with her wiggling.

“They take turns picking on each other but also always make each other smile,” Alyson says.

The girls have had regular physical and occupational therapy at Mott to strengthen muscles and help meet developmental milestones. Once the girls came home, therapists helped them find a swing specially molded to them.

They also needed nasogastric tubes for eating to ensure proper nutrition and toted around oxygen tanks to help with breathing. The family learned how to use these devices on the go.

Clothing options also took some creativity. When one of Alyson’s coworkers came up with the idea to cut two onesies down the middle, stitch them together and use the snaps to open and close them, Phil ran with it.

He found a sewing machine at a garage sale and has been making the girls homemade clothes ever since they came home.

One thing Amelia and Sarabeth definitely have in common: their love and adoration for big sister Kennedy. Before the girls’ births, the Mott Child and Family Life team gifted Kennedy two dolls sewed together to show her what her “special sisters” would be like.

“For her it was just normal when she met her sisters,” Alyson says. “She loved them right away.”

Before the separation surgery, the parents made clear what they were most looking forward to.

“Naptime in the chair, that’s what I really want to do,” Phil says. “I just want to pick one of the girls up by herself and rock her to sleep.”

For Alyson, it’s having the chance to watch her daughters grow through their own experiences.

“The hardest part was not knowing what was going to happen,” she says. “They are healthy little girls with separate personalities who just happened to be stuck together. We always knew that we had to give them the chance to live their lives independently but it was so hard to imagine them going through such a big surgery.

“I can’t wait to see them go through all of the big milestones like crawling and walking and watching them grow up.”